The developer of the controversial Lilac Hills Ranch project contributed $50,000 to the Republican Party of San Diego County shortly after the party voted to endorse the development.

LHR Investment Company LLC — a subsidiary of developer Accretive Investments — made the donation on Sept. 21.

Tony Krvaric, chairman of the Republican Party of San Diego County, wrote in an email response to inewsource that the check covered a $10,000 platinum sponsorship of the party’s annual Salute to Republican Elected Officials event on Sept. 24 and inclusion in the party’s official voter guide mailer. Krvaric said the 50-member party committee that makes endorsements voted to support the ballot question, known as Measure B, at its Sept. 12 meeting.

Accretive has separately pumped nearly $2.2 million into a committee supporting the measure.

James Gordon, a Lilac Hills Ranch detractor and board member of the Deer Springs Fire Protection District who attended the Sept. 24 fundraiser, said Krvaric told him at that event the decision to endorse was made Sept. 20.

Regardless of whether the endorsement was made on Sept. 12 or 20, the order of events — an endorsement followed by a five-figure contribution — has Measure B opponents apprehensive.

Mark Jackson, a vocal opponent of Lilac Hills Ranch who is directing the campaign against it, said the contribution and endorsement are connected.

“That was the price of getting the endorsement, that’s my personal opinion,” Jackson said. “It looks — everything to me — like an endorsement was bought from the San Diego Republican Party.”

Krvaric did not reply to follow-up questions about his conversation with Gordon but put the kibosh on any notion that the party’s endorsement could be bought, saying in an email that the party endorsed Measure B because “we need more housing and our full committee agreed with the county planning staff, the planning commission and the local Chambers of Commerce that this is a good project.”

Lilac Hills Ranch is a 1,700-home project that critics say is too intensive for the rural Valley Center area.

‘No one had ever approached us’

As a Republican elected official (he says he changed his registration from independent “a couple weeks beforehand”), Gordon decided to attend the party’s Sept. 24 event specifically to see where the party stood on Measure B (“plus the free drink”).

“He didn’t seem like he wanted to discuss it — is the best term,” Gordon recalled. “So, he informed me that the previous Tuesday, a group had gotten together and had decided to endorse Measure B.”

Gordon asked who comprised the group and whether members had spoken with anyone from the “No on B” side. He said Krvaric walked away without answering either question but that after speaking with other leaders of the “No” campaign, he’s certain nobody from the county GOP reached out.

Krvaric did not address questions from inewsource about whether the county GOP interviewed anyone from the “No on Measure B” side prior to deciding to endorse the measure.

While grabbing a drink at the bar, he saw a sign listing one of the event’s “platinum sponsors”: Accretive Investments. 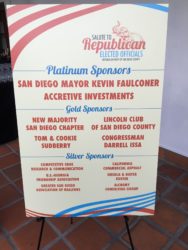 A sign recognizes the sponsors of the Salute to Republican Elected Officials event. Sept. 24, 2016. Photo courtesy of James Gordon.

“And I was just dumbfounded,” Gordon said. “You know no one had ever approached us.”

Randy Goodson, principal of Accretive Investments, declined an interview request but sent a statement through a spokesman.

The $50,000 donation is the first by LHR Investment Co., its parent Accretive or employees of either company to the county Republican Party since a $1,250 contribution in 2011. It makes Accretive one of the nine largest donors to the county party in the 2015-2016 election cycle.

Lilac Hills Ranch has been tangled in controversy for years. Opponents say it violates the county’s general plan, would increase congestion and put added pressure on local schools and firefighting agencies.

County planning commissioners voted 4-3 last fall to recommend the project’s approval but only if Accretive made substantial (and expensive) changes to the proposal. Then, county Supervisor Bill Horn (a beneficiary of Accretive campaign donations), seen as a surefire “Yes” vote, recused himself after the state’s Fair Political Practices Commission ruled he had a conflict of interest in the matter.

Faced with these setbacks, Accretive paid signature gatherers more than $1 million to collect enough signatures to put the measure on the ballot, thereby bypassing the Planning Commission and Board of Supervisors.

Opponents well behind in donations

The “No on B” side is badly outgunned, having raised about $100,000. Accounting for $45,000 of that total is Save Our Forest and Ranchlands, an environmental protection organization. Duncan McFetridge, the president of the Descanso-based nonprofit, speaks of the development in stark terms.

“This represents a monumental danger to our community so you put your meager resources where (you) think it’s best,” McFetridge said.

The only other five-figure donations to the “No on B’’ side have come in the form of two $20,000 contributions from a limited liability company: West Lilac Farms II LLC made the first donation on Aug. 19 and followed that up with another contribution on Sept. 22. Data on file with the California Secretary of State lists James Douglas Pardee (no relation to home builder Pardee Homes) as one of two owners of the LLC.

“We’re running a hundred-to-one campaign. We realize that.”
-Mark Jackson, “No on B”

Data from the San Diego Assessor/Recorder/County Clerk’s Office indicates that Pardee owns a small amount of property in Valley Center near the site of the proposed development. Pardee declined to comment for this story through his wife.

San Diegans for Jobs and Housing is the committee Accretive created and has funded to the tune of nearly $2.2 million. The committee has spent more than that already, including the $1 million to collect signatures and nearly $850,000 for television advertising.

Mark Jackson said he knows his side can’t hope to compete with Accretive when it comes to advertising.

Jackson says the “No on B” camp is counting on a combination of in-person and social media outreach coupled with endorsements from well-known organizations to overcome their staggering cash disadvantage.

Lilac Hills Ranch ‘Measure B’ is a scam