Escondido homeless gather at Heritage Garden pocket park, Grand Avenue and jumper Street. They said they chose the spot because it's a lot less crowded than Grape Day Park where most homeless people stay during the day and gets more sunlight/Dan Weisman

When Jim Floros started his job as president and CEO of the San Diego Food Bank at the beginning of 2013, he says the nonprofit served about 330,000 people a month.

The divergence between poverty and employment points to deeper problems in the San Diego region’s economy.

That might seem odd given that San Diego County’s unemployment rate fell from 8.8 to 4.3 percent over that same period, according to the Bureau of Labor Statistics.

But Floros said having a job doesn’t mean you don’t need help.

“The thing that people really don’t realize regarding poverty and hunger (is) the people most affected — the term that’s most commonly used — is the working poor,” Floros said. “It’s people really in lower-paying jobs, people struggling to get by, trying to make ends meet.”

Data released last month by the Census Bureau supports that notion, showing that even as more San Diegans are finding work, more of them are falling into poverty.

An inewsource analysis of two Census Bureau surveys — one conducted between 2006-2010 and the other between 2011-2015 — shows that the countywide poverty rate grew from 12.3 to 14.5 percent. That’s an increase of 94,000 people living on incomes below the poverty line, enough to fill two Petco Parks.

The data suggests that between 2011-2015 more than 450,000 people were living below the federal poverty line (defined as $12,082 a year for an individual), more than during the five-year period encompassing the Great Recession of 2007-09 and the years that bookended it.

It rose in parts of the county with previously low rates of poverty and in areas where poverty was already high. It grew in pockets of North County, East County, the South Bay and the coast.

Good jobs are hard to find

Nearly three-quarters of working-age San Diego County residents who were living in poverty surveyed in 2011-15 reported working some amount in the week before the survey.

Peter Brownell, research director at the San Diego-based Center on Policy Initiatives, says the Great Recession wiped out many good-paying jobs. The recovery that followed hasn’t brought them back.

“Even as the jobs numbers nationally improved, you saw employment was improving but wages weren’t moving at all. I think that’s a big story in San Diego,” Brownell said. “In terms of the jobs that we lost during the Recession, a lot of those were more middle-income jobs in industries that pay more in middle incomes and the jobs that we’ve seen in the quote-unquote recovery have been a lot of service economy jobs that are lower-paying jobs.”

What’s more, Brownell said, many workers living in poverty are holding down part-time work but would take full-time employment if they could get it.

Data from the latest five-year Census survey suggests that could be the case in San Diego County. Among prime working age individuals living in poverty who had worked in the previous 12 months, 79.1 percent were working part-time compared with 20.9 percent who were working full-time.

In that case, San Diego seems to reflect a nationwide trend. A report published last month by the Economic Policy Institute, a think tank focusing on low- and middle-income workers, found that 6.4 million Americans want full-time work but are stuck working part-time jobs. The report found that the number of people working part time involuntarily was 45 percent higher than it was before the Great Recession.

“We’ve created jobs as jobs but they’re not the same quality jobs in terms of both the pay and the hours that are available to folks,” Brownell said.

Poverty up across the county

The areas with the highest proportion of residents living below the poverty line were concentrated in a few spots: a stretch of neighborhoods from Barrio Logan east to Lincoln Park, City Heights, National City and parts of El Cajon and Chula Vista.

(The Census data also shows high poverty on the campuses of San Diego State University and UC San Diego but it’s unclear how accurate those measures are because some students who report little income are primarily supported by their parents.)

But while San Diego’s poorest neighborhoods are concentrated, the poverty increase has occurred in a wide geographic range, even in some areas generally considered well-to-do. 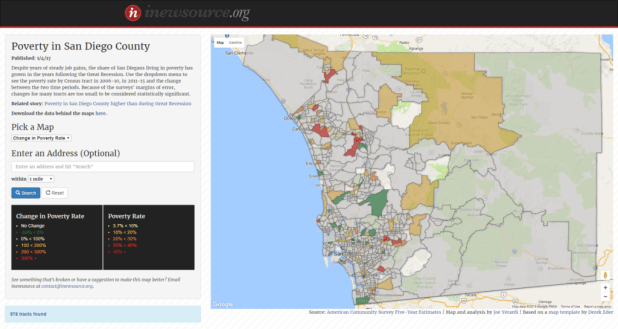 Click here for an interactive map of poverty in San Diego County.

Of the 10 census tracts — contiguous areas of between 1,200 and 8,000 residents — that saw the biggest increase in the proportion of residents living in poverty between the 2006-10 and 2011-15 time periods, six were in North County, one was in La Jolla, one in La Mesa, one in El Cajon and one in Bonita.

The neighborhoods seeing the biggest spikes were those that previously had fairly low rates of people living below the poverty line.

CPI’s Brownell wasn’t surprised by the widespread increase in poverty.

While the data suggests the county’s increase in poverty is broad, not all groups are struggling equally.

Brownell says this is partly due to the gender pay gap — the difference between what women and men are paid for similar work.

“Compared to households that only have one parent that are headed by a father, women on average earn less than men and so I think that sort of gender pay disparity combined with the fact of it being a single-parent household makes those households and all the folks — including the kids in them — much more vulnerable,” Brownell said.

Floros, of the San Diego Food Bank, said single mothers are a large part of the population served by the organization, and that they come with specific concerns.

Among them is the high cost of diapers for single mothers who qualify for subsidized daycare.

“What we see are these single mothers. They may be on (food assistance program) CalFresh. They may be unemployed. They get a job…. They’re lifting themselves out of poverty and then when these mothers are taking their kids to daycare, they’re expected to show up with eight to 10 diapers,” Floros said.

To address this need, Floros said the Food Bank is moving toward offering a “diaper bank” that receives diaper donations and also purchases them in bulk and provides them free-of-charge to needy mothers.

The federal poverty rate fails to account for regional differences in the cost of living. For a high cost area like San Diego County, the true poverty rate is likely much higher than the Census data indicates.

The Center on Policy Initiatives detailed this phenomenon in a report published in September. The nonprofit calculated that a person in the city of San Diego earning less than $24,164 a year — twice the federal poverty line — was living in “economic hardship.”

Using that metric, more than 1 million people in San Diego County — nearly one in three residents — were living in economic hardship in the 2011-15 period.

What’s more, Donald Trump’s election has injected a level of uncertainty into the future of social safety net programs.

Given the broad support for poverty amelioration programs in California, Brownell said state and even local governments could well try filling in some of the gaps.

Still, Sacramento can only help so much.

“I think there’s certainly a will to try and provide these kinds of programs but the state still has to balance its budget as well,” Brownell said.

The uncertainty over these programs’ futures worries those on the frontline of the fight against poverty, like Jim Floros.

“We are holding our breath because obviously these programs and the programs that the federal government funds are really vital to the welfare of these people,” Floros said. “So everybody’s holding their breath, I guess that’s probably the best way to sum it up.”