The scene at Tbilisi, Georgia Airport where Rep. Duncan Hunter (R-50th District) flew last August on a $5,620 trip paid for by the U.S.-Georgia Friendship Association/Fly Georgia

In the past 12 months, San Diego County’s congressional delegation and the people who work for them have taken 17 trips paid for by nonprofits, think tanks and private companies. In all, $37,525 was spent on travel to places that include England, Austria, Azerbaijan, New York and Seattle.

“There’s an old expression, there’s no such thing as a free lunch,” Luna said. “When congressmen take money for travel … the question is what do the people paying for it want out of that connection.”

Most of the trips for the San Diego County delegation were taken by staffers, though Reps. Susan Davis, Darrell Issa and Duncan Hunter also took trips that others funded.

Hunter, an Alpine Republican, traveled to Tbilisi, Georgia, last August at a cost of $5,620. Joining him was Republican Rep. Mark Sanford of South Carolina, who spent $5,096. The U.S.-Georgia Friendship Association, a San Diego-based nonprofit, paid for both trips. 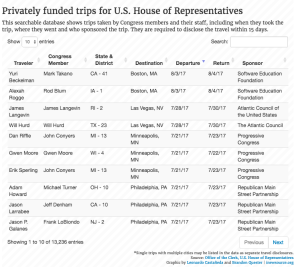 Click here to search all privately-funded travel by House of Representative members and their staff.

Disclosure forms say the congressmen met with government officials including Georgia’s  president and prime minister. Hunter’s travel disclosure form said the meetings helped with “his political understanding of the country.”

Hunter is under a federal investigation for questionable campaign spending, including a trip to Italy paid for in part with campaign contributions. Hunter has since repaid his campaign $60,000 for inappropriate expenditures. Earlier this year, the FBI seized computers and documents from the offices of Duncan’s campaign treasurer.

Davis, a San Diego Democrat, went to London last August courtesy of the Aspen Institute, an international think tank. She went to “participate in education policy forums, meetings and seminars,” according to her travel disclosure form.

Her husband also traveled with her. The institute spent $14,136 to cover the costs for both of them. Financing for the trip came from the Democracy Fund, Henry R. Luce Foundation, John D. and Catherine T. MacArthur Foundation, and Rockefeller Brothers Foundation.

Davis returned on Aug. 18 from another Aspen Institute trip — this one to Oslo, Norway. Disclosure documents for that travel have not yet been filed.

During the trips, scholars and experts speak with and work with legislators on a wide range of issues, Davis said.

“It’s not just that they come in and give a speech and leave. They’re there and they’re available,” she said. “It’s certainly very educational. But I think it also has created a lot more friendships across party lines and regional lines.”

Not including Oslo, Davis has taken 14 trips funded by the Aspen Institute since 2008 for a total of $147,717. She was accompanied by her husband during all of those trips, including to Barcelona, Spain; Addis Ababa, Ethiopia; and Istanbul, Turkey. The institute also reimbursed her for meals to attend a conference in San Diego.

Davis said her husband attends all of the same lectures and meetings that she does.

“They actually prefer for your spouse (to come on the trip),” she said. “Because you’re then hearing the same kinds of information, you have that opportunity to really sound out a spouse, a family member during and after.”

The Oslo trip was on America’s energy future. Previous conferences have focused on “political Islam,” nuclear challenges for the United States and the “No Child Left Behind” law.

Issa, a Vista Republican, took two privately funded trips in the past 12 months. The Heritage Foundation paid $1,044 to send him to the Conservative Members Retreat in New York in February. Session topics included repealing Obamacare, tax and entitlement reform, and a session by Fox News host Sean Hannity on conservative communication. The foundation is one of the top sponsors of congressional travel nationally.

Issa’s staff members have taken trips to conferences including the National Association of Broadcasters and the Consumer Electronics Show, both in Las Vegas. Issa spokesman Calvin Moore said the travel is an important way for staffers and House members to interact with the community.

“They’re also a way for staffers from both sides of the aisle to come together, work on an issue, get some first hand knowledge and make better policy as a result,” Moore said.

Reps. Juan Vargas and Scott Peters, both San Diego Democrats, didn’t take any privately funded travel in the past 12 months, but their staffers did.

Vargas’ staffers took five trips for a total cost of $4,963.

Their travel included trips to Ireland, New York and Virginia taken courtesy of the Woodrow Wilson International Center for Scholars and the William and Flora Hewlett Foundation. The trips were part of the center’s Congressional Cybersecurity Lab.

Only one staffer for Peters took a trip. Center Forward, a centrist political group formerly known as the Blue Dog Coalition, spent $500 for the staff member to attend its conference in Middleburg, Virginia. His staff also took Center Forward-funded trips in 2014 and 2016.

Jacob Peters, a spokesman for the congressman, said in an email, “This trip offered an uncommon, bipartisan forum with outside partners and experts to discuss national security priorities, the state of health care reform, and fixing the tax code to help American entrepreneurs compete.”

Moore, with Issa’s office, said there are strict rules about what trips Congress members and their staffs can take. The House Committee on Rules requires pre-approval of all trips, as well as disclosure about who went.

“There’s a very lengthy process that the ethics committee goes through to make sure the public interest is handled and that trips are on the up and up,” Moore said.

But political scientist Luna said the safest way to prevent influence buying would be to abolish privately funded travel.

“If a congressman has a reason to take a trip for the public good, it should be funded by the public,” he said.

Be the first to comment on "Local House members, staff on the fly"