Are these guys crazy or what?/innewscource

Analyzing Trump for sanity’s sake is a product of innewsource, a nonprofit, nonpartisan news organization based at San Diego State University providing readers with the most authoritative and in-depth stories. Used by permission. For more, visit innewsource.org

It’s no secret Donald Trump is an unusual president, one whose late night tweets, comments and vitriol have prompted some to question his sanity.

All that noise has led clinical psychiatrists to be asked by the news media and others to weigh in on the president’s mental health. Does the nation’s leader have a serious disorder that influences how he presents himself to the public?

In Perspective gives reporters a chance to further explain news developments so readers can make connections.

And if so, does the psychiatry community have a responsibility, an obligation, and a moral if not patriotic duty to speak their minds if they fear his words and actions endanger the nation?

The answer for some psychiatrists is a resounding “yes.”

They said they’ve watched him long enough to diagnose him with one or more serious mental illnesses such as narcissistic personality disorder, for starters.

Others say, not so fast. Publicly diagnosing the president can get them in a lot of trouble.

That’s because of “The Goldwater Rule,” a policy of the American Psychiatric Association (APA) that says a psychiatrist can’t diagnose without a patient exam and consent lest he or she be found guilty of unethical behavior, face professional rebuke and get themselves kicked out of the association.

The Goldwater rule dates back more than 50 years and grew out of a 1964 survey on “The Mind of Barry Goldwater,” published by Fact magazine, in which nearly 1,200 psychiatrists responded that the Republican presidential candidate was mentally unfit to run the country.

Many offered specific diagnoses based on their observations from afar, through newspapers and TV: Goldwater had schizophrenia, psychosis, persecution complex, paranoia, or was sexually confused, to name a few. 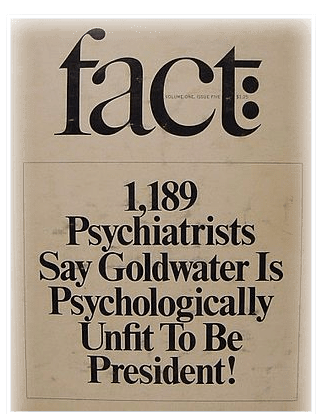 Fact Magazine article that prompted the controversy about whether psychiatrists should publicly discuss mental health of public figures they haven’t actually seen.ame a few.

Goldwater won a $75,000 libel case that put Fact out of business, and sanely served several more decades in Congress, but the fact that so many psychiatrists – even APA members – had weighed in, many with their own stark diagnoses of the candidate, caught the APA off guard.

At a recent annual APA meeting in San Diego, the rule was the subject of hot debate. (Spoiler alert: It’s not going anywhere any time soon.)

The discussion was provocative.

Dr. Paul Summergrad, psychiatrist-in-chief at Tufts University in Boston, argued to a roomful of colleagues that it’s not professional for psychiatrists to spout off about public figures they only know through media; the profession must uphold its standards.

Others vehemently and publicly disagreed, some calling the Goldwater Rule a gag rule, a violation of their right to free speech.

Dr. Jerrold Post, a psychiatrist who for 21 years assessed the mental health of political leaders for the Central Intelligence Agency, said that under President Trump’s leadership, the nation is in danger and psychiatrists have a duty to warn the public.

“One of the things I’m generally concerned about – I’m not sure if it’s because I’m a psychiatrist, but as a citizen – is if that interesting character in charge over in North Korea, Kim Jong Un, and that interesting character who happens to be our president at this point, get into a spiral, I really worry they could play off each other and we could stumble into an international war,” Post said.

“Is this not a time when it is in fact unethical to be silent, when we were particularly called upon to contribute?” he asked.

One prominent psychiatrist who chaired the task force that published the Diagnostic and Statistical Manual IV in 1994, the so-called bible of mental disorder definitions, told inewsource that the Goldwater Rule is not the issue. 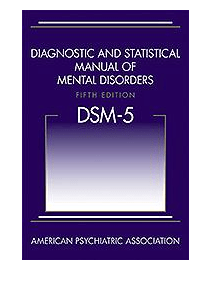 Diagnostic and Statistical Manual of Mental Disorders is the bible of mental illness.

Now retired and living in Coronado, Dr. Allen Frances asked: What good would it do to diagnose Trump?

Frances knows mental disorders and he knows Trump. He wrote the definition of narcissistic personality disorder and is the author of a book, to be published this fall, Twilight of American Sanity: A Psychiatrist Analyzes the Age of Trump.

“Anyone with eyes to see and ears to hear can realize that Trump every single day says and does remarkably stupid, self-serving, dishonest, impulsive things. Giving him a diagnosis of narcissistic personality disorder isn’t going to change a thing,” Frances said.

The New York Times published a letter in February from Frances about Trump’s mental health, and since then Frances said he is “even more convinced at the absurd grandiosity of psychiatrists who think they can accurately diagnose someone at a distance, that their diagnosis will add anything to what everyone knows about Trump.”

Dr. Paul Appelbaum, director of the division of Law, Ethics, and Psychiatry at Columbia University, believes the Goldwater rule should be maintained, but he agreed with Frances’ assessment of the narcissism in his own profession.

“There are “very few unemployed steelworkers in Michigan whose votes would have been changed by hearing me, as a psychiatrist at an elite university in New York, opining that I thought the candidate they were going to vote for was unbalanced and should not attract their support,” he said.

The San Diego Psychiatric Society and Dr. Rodrigo Munoz, a San Diego psychiatrist and former president of the San Diego County Medical Society, also support the APA’s policy on the Goldwater rule, which the APA reaffirmed in March. It’s not a good idea to diagnose people and public figures one hasn’t actually examined, Munoz said.

Love the APA or Leave?

Summergrad, the Boston psychiatrist, noted that if psychiatrists insist on rendering a mental diagnosis of the president, they can simply resign their membership from the APA. “It’s not a licensing board type of issue.”

Is there anything Trump might do that would prompt the APA to revise the rule?

Appelbaum, from Columbia University, suggested it wasn’t likely. In “every election since Goldwater,” he said, mental health professionals including psychiatrists have expressed public concern about the mental stability of a major political candidate. And the comments “align perfectly with the political inclinations” of their speakers.

She added that if she can get arrested for protesting a healthcare plan without violating the APA’s ethical principles, “then why can’t I speak publicly about my professional opinion about a public figure’s alarming behavior?”

About this article’s writer, Cheryl Clark:

Cheryl Clark is a senior healthcare reporter at inewsource. To contact her with questions, tips or corrections, email cherylclark@inewsource.org.